Texting without a keyboard: Facebook is working on inputting thoughts 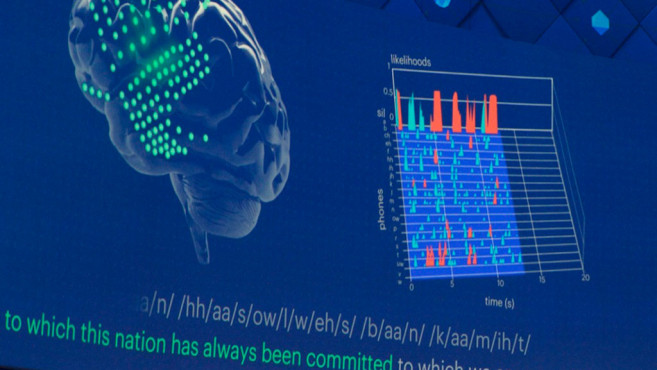 At its developer conference F8, Facebook presented a vision with which people send words from their brains to computers.

It sounds like science fiction, but Facebook is actually working on a mind-reading method: In the future, the world's largest online network would like to turn human considerations directly into text. Would you like an example? At the in-house developer conference F8 in San José, California (April 18 and 19, 2017), Facebook manager Regina Dugan mentioned the possibility of sending a friend a text message without taking out the smartphone. The current aim is 100 words per minute, which will be realistic in just a few years, Dugan continues. What about the research results in July 2019 - around two years after the starting signal? A published article on the science platform Nature Researchinforms.

Writing texts only with the thought: That is what Facebook wants to make possible. To do this, the company is working on a brain-computer interface that does not have to be implanted in the body, i.e. is non-invasive. A portable device is supposed to read out brain activities from the outside, analyze them by computer and translate them into control signals. Sounds like a dream of the future? At the University of California in San Francisco, a corresponding method for measuring brain activity has already been tested on test subjects. Researchers examined the brain activity of three epilepsy patients. Patients should answer simple questions. With the help of an algorithm it was then possible to record the words - with 76 percent accuracy! So far, however, the measurement has only been possible using an implant. It will therefore take some time before the non-invasive technology comes onto the market.

In her 2017 lecture, Dugan already referred to studies at Stanford University. There, researchers succeeded in having a paralyzed woman write eight words per minute into the computer - letter by letter - thanks to electrodes in her brain ("the size of a bean"). However, implants are not suitable for mass use of the technology. Instead, you need very sensitive sensors on the surface of the head that monitor brain activity "hundreds of thousands of times per second to the nearest millimeter". “Such technology doesn't exist today. We're going to have to invent them, ”said Dugan. Over time, it should no longer be necessary to form words from individual letters in the head. A side effect: people are then able to express themselves in other languages ​​without having learned them. For example, the idea of ​​a cup could be translated directly into Spanish or Chinese using the corresponding foreign word.

All popular messengers in the test

Elon Musk is also doing research on the human brain

Not only Facebook is thinking about such a technology: Tech billionaire and Tesla boss Elon Musk is also researching in a new company how to network the human brain directly with computers. Musk is involved in the start-up Neuralink, which wants to develop corresponding electrodes. (With material from the dpa).
<?