Who was Chanakya and Dhana Nanda

The biography of Chanakya - great diplomat of ancient India 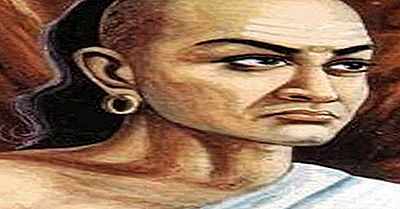 Chanakya lived in India during the 4th century BC. He was a teacher, economist, philosopher and royal advisor. His literary works are considered to be the root of political science and economy in India. He is also credited with making a contribution to the theory of classical economics, namely the idea that governments should not control the market. Historical reports suggest that Chanakya played a significant role in establishing the Maurya Empire by helping Emperor Chandragupta come to power. He became the political advisor to Emperor Chandragupta and later served the same role for Chandragupta's son Bindusara.

Sources of information about Chanakya

Little is known about Chanakya as there are few historical documents from his lifetime. Most of the information about his life and influence on India comes from four main sources. These sources are considered half-legends and can be found in the Buddhist text Mahavamsa; the Jain text, Parishishtaparvan; the Kashmir text, Kathasaritsagara; and the Vishakhadatta text, Mudrarakshasa. Each legend shares a common theme that Chanakya was disappointed by King Nanda and sought revenge by promoting the reign of Emperor Chandragupta.

There is some confusion about its exact name. In his book Arthashastra, Chanakya refers to himself as Kautilya. This name is said to come from his family. At one point the same book refers to his name as Vishnugupt. However, some academics believe that Kautilya and Vishnugupta could be different people.

The Buddhist version of Chanakya's biography

Chanakya grew up as a brahmin in Takshashila under the rule of the Nanda kings. According to the Buddhist account of his life, he grew canine teeth, a sign of royalty. His mother worried that his teeth would make him become king, and after that he would forget about her. To show his mother that she had nothing to worry about, he broke off his canine teeth. Later in his life, King Dhana Nanda held a ceremony for Brahmins. Chanakya visited him, and when the king saw him with his broken teeth and misaligned feet, he threw Chanakya out of the incident.

Embarrassed and indignant, Chanakya cursed the king. The king requested his arrest, but Chanakya escaped with the help of Prince Pabbatha, King Dhana Nanda's son. He ran to the Vindhya Forest, where he spent his time using his in-depth knowledge of economics to turn one gold coin into more. He used this trick until he got 800,000,000 gold coins. Chanakya hid all his money and went in search of someone worth ruling the country. During his search, he came across a group of children playing a game of king and robbers. One of these children, Chandragupta, pretended to be a king and cut off the robbers' arms and legs. Chanakya watched him put his limbs back on. Testifying to this, Chanakya wanted to know more about the boy. Chandragupta was born into a royal family; his father was killed and his mother had to run away. The boy grew up with a foster father. Chanakya paid the foster father's gold coins 1,000 and took Chandragupta with him.

Chanakya had to decide who would become emperor: Prince Pabbatha or Chandragupta. He gave both boys a woolen thread necklace. To test her skills, Chanakya asked Pabbatha to remove the necklace from Chandragupta's neck without breaking it or waking it up. The boy was unsuccessful. On another night, Chandragupta tried the same challenge. He was successful by cutting off Pabbatha's head. Chanakya began a 7 year training program with Chandragupta to teach him about royal responsibilities.

When Chandragupta grew up, Chanakya unlocked his treasure trove of gold coins and hired an army. The army failed to overthrow King Dhana Nanda. They happened to be walking around when they heard a mother reprimand her son for throwing away the edges of a piece of cake. She criticized him, saying he was like Chandragupta trying to overthrow the kingdom from the center instead of attacking the outskirts first. Armed with a new plan, Chandragupta and Chanakya gathered again in an army and began attacking the outer parts of the city, working their way to the center. They murdered the king, took his treasure, and Chandragupta took the throne.

Two of Chanakya's well-known books are Chanakya Niti and Arthashastra. The Chanakya Niti is a collection of proverbs also known as aphorisms. Some scholars believe that these verses and phrases were compiled from previous works. The Arthashastra defines the responsibilities and duties of a political leader. It also affects political issues, including financial, war, welfare and international relations.

Chanakya's legacy lives on through depictions of his character in theatrical, television, film, literary and academic publications and productions. Some of them were created as recently as 2015, which shows its enduring importance in Indian culture. In addition, the Arthashastra was recommended by the country's former National Security Advisor, who believed it was a clear explanation for relevant strategies.

Several places were named in his honor. These locations include 3 institutions: Training Ship Chanakya, Chanakya National Law University, and Chanakya Institute of Public Leadership. Other places with his name are the New Delhi district of Chanakyapuri and the Chanakya Circle in the city of Mysore.

As mentioned earlier, the literary works of Chanakya continue to be relevant in India today. He is considered to be one of the first people to have the vision of a united Indian subcontinent and is often referred to as the architect of the First Empire of India. His ideas behind police duties, justice systems, charitable donations, war prevention and the elimination of enemy kings created a framework for today's India. These theories have also earned him the nickname of the Indian Machiavelli. One of his most famous quotes is: "Never share your secrets with anyone. It will destroy you."