Green and tall the green lizard

Green lizards are bright green with their coloring the most noticeable among the domestic lizards. While the females are colored white on the neck and throat, the males stand out with their blue coloring on the underside of the head. Another special feature is the tail, it is twice as long as the body. Very often, however, they lose their tails in quarrels or through unsuccessful attacks by robbers. The tail then grows back, but is no longer as long as the original one. 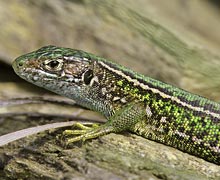 Green lizards take four years to mature. They hatch from the egg in early autumn, weighing 1g and are light brown in color. The beginning is the most difficult for the little lizards, most of them die within the first year. While their color changes more and more into green in the following years, they still have to be very careful, because green lizards have a whole range of enemies, e.g. crows, foxes and hedgehogs but also chickens and cats. 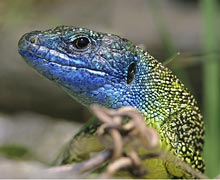 Their year goes something like this: in the spring they leave after five to eight months Hibernation their quarters. After mating, the females lay about ten eggs, from which the small emerald oaks hatch in September. From October they go into hibernation again. Before that, however, the young animals have to eat enough reserves. Spiders and insects such as grasshoppers, crickets and beetles are on their menu, but they also love sweet fruits such as blackberries, grapes and strawberries. Green lizards can live up to 12 years with a little luck. 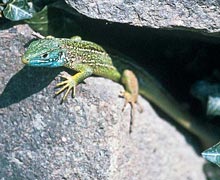 They live mainly on dry embankments and meadows, in vineyards and deciduous forests. You can best observe them when they are on stones and dead wood to sunbathe. A habit that they have in common with all cold-blooded animals, because they need the sun to “fill up” with energy. At such moments they are easily visible to their predators, so there should always be enough hiding places in the area. Dense bushes and dry stone walls are particularly suitable for this.