What is a PN diode 2

The electrons (free charge carriers) migrate from the n-conductive layer to the p-conductive layer near the boundary area without any external influence from voltage or current, but only from the influence of thermal oscillations.
In the detailed examination, the free electron of the phosphorus atom migrates over the boundary into the p-layer and there forms a bond with the aluminum atom. The phosphorus atom loses an electron and is now a positively charged ion. The aluminum atom has one more electron and is now a negatively charged ion.
In the border area of ​​the two layers, many electrons migrate from the n-layer into the p-layer. The electrons from the n-layer recombine with the holes from the p-layer.
The migration of electrons is called charge carrier diffusion.

In the following, the functional principle of a semiconductor diode is explained, which consists of a p- and an n-conductive layer. If one looks at this pn junction with its mode of operation in the forward and reverse directions, one can speak of a one-way street for electrons. 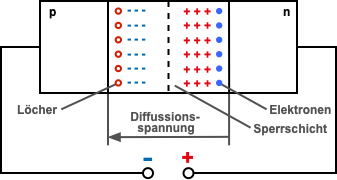 If the diode is operated in reverse direction, the p-layer is on the minus pole and the n-layer on the plus pole.
The holes of the p-layer are attracted to the minus pole, the electrons of the n-layer are attracted to the plus pole. This enlarges the barrier layer, which is also called the boundary layer. No charge carriers can get through the barrier layer. Only a very small amount of current can flow through the junction. 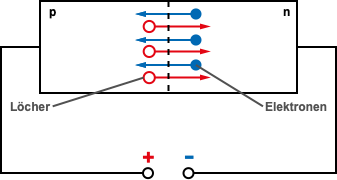 If the diode is operated in the forward direction, the p-layer is on the plus pole and the n-layer on the minus pole.
The holes of the p-layer are repelled by the plus pole and the electrons of the n-layer are repelled by the minus pole. The boundary layer is now flooded with free charge carriers. A current flows through the diode across the pn junction. And the diffusion voltage built up by charge diffusion is reduced.

Electronics simple and easy to understand

The electronics primer is a book about the basics of electronics, components, circuit technology and digital technology.

Perfect for beginners and newcomers