How do peripheral and integral proteins differ?

A lipid bilayer with proteins

Now I've got a little nostalgic again and have taken an old picture that I made for the basic biology lecture (Prof. Heckmann) in 1979. The lettering is up to date, however.

What the figure also shows are the many sugar molecules that are on the lipids and also on the proteins - but only on the outside of the membrane. These sugar molecules play an important role in cell recognition and in the interaction of the various cells - but I don't want to go into that on this page. 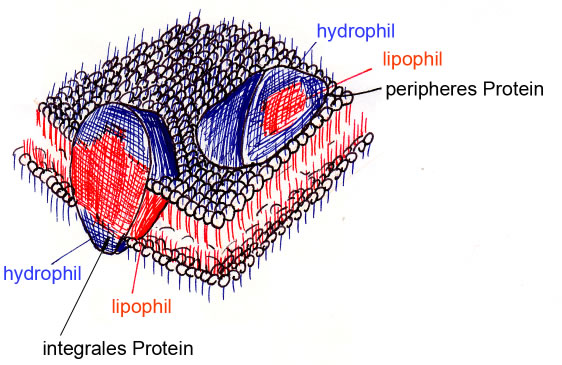 A three-dimensional representation of the cell membrane

In this picture you can see a three-dimensional representation of the cell membrane with an external peripheral protein and an integral protein. This drawing also shows that the membrane proteins have hydrophilic and lipophilic regions with which they can anchor themselves well in the cell membrane.

Anchoring the proteins in the membrane

On this subject, I would like to introduce you to a small task that I developed from an illustration in a school book. Consider the following amino acid chain:

Now we determine which of these amino acids are polar and use colors to identify the polar acidic, polar neutral and polar basic amino acids:

Now we assume that this amino acid sequence coils up as an alpha helix. To do this, we print out the primary structure in color, cut it out as a long strip and wrap the strip around a thick pencil so that one turn comprises 3.6 amino acids on average - that is the exact value for an alpha helix. 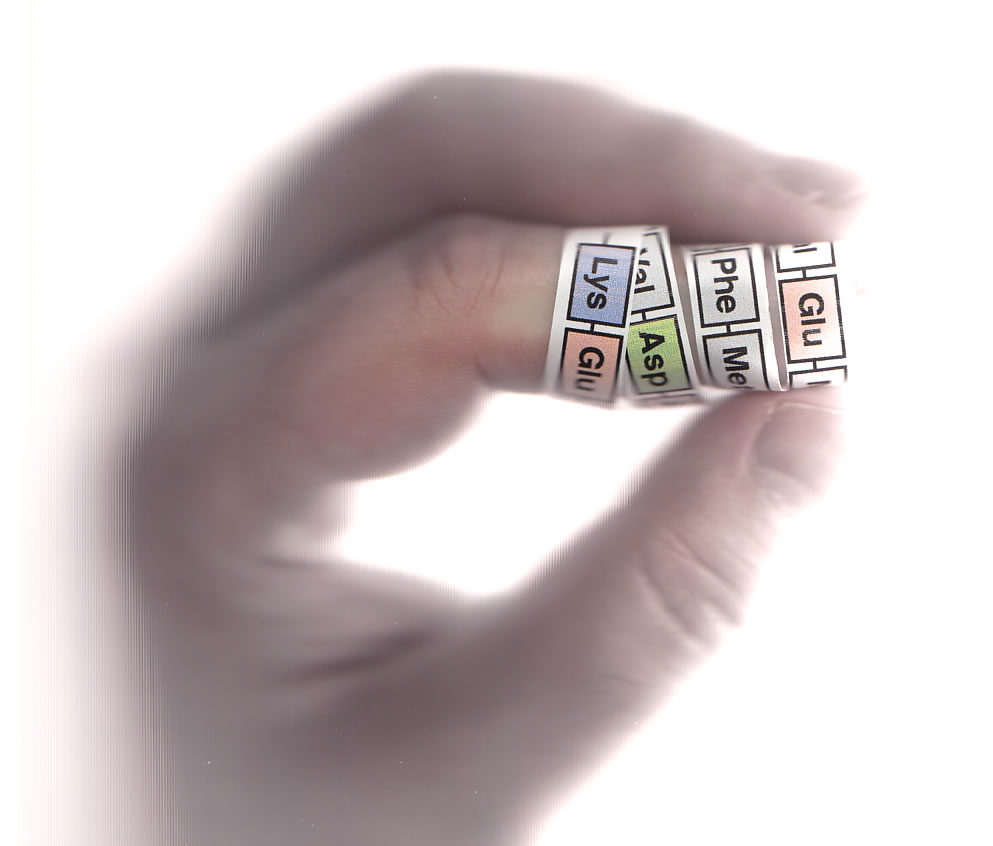 The amino acids wrapped around my left index finger

Oh, I'm just seeing that my left index finger is almost the correct diameter. So I wrapped the cut out strip around my left index finger and then scanned it. You can see the impressive result above. Four of the seven polar amino acids are on the same side of the alpha helix. 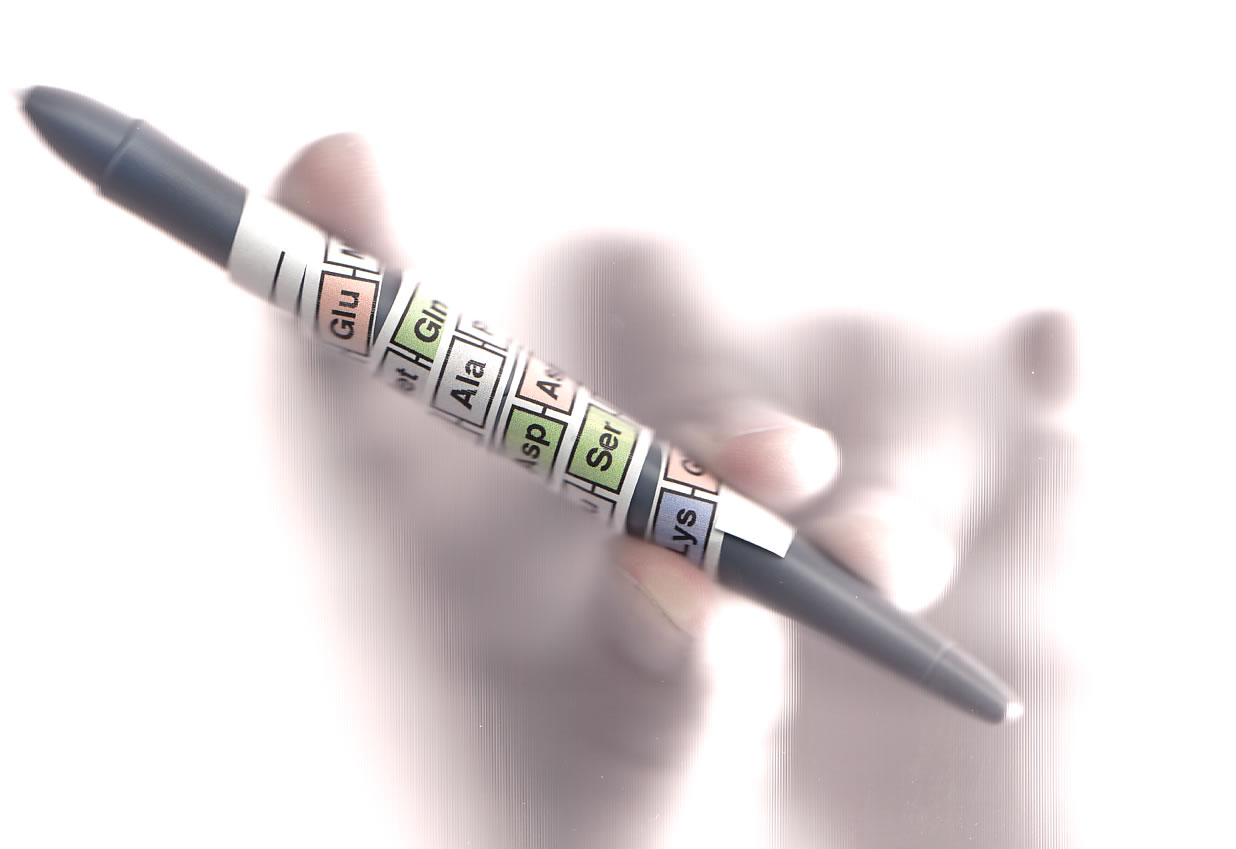 It's even better with a thick ballpoint pen

If I wrap the strip around a thick ballpoint pen with a slightly smaller diameter, you can even see all seven polar amino acids on one side of the helix.

The alpha helix, which results from the amino acids, has a polar side and a non-polar side. You can't do much with that alone. But if several such helices come together, the result is an interesting structure, which I would also like to show you. 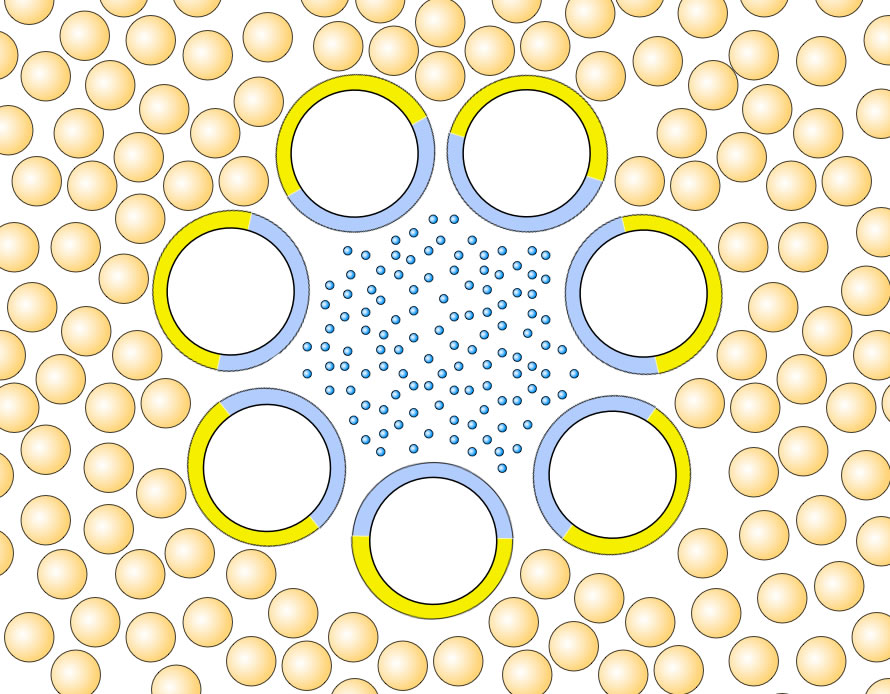 The figure above shows a more complex integral membrane protein from above. The seven alpha helices with their lipophilic and hydrophilic areas are easy to see. The hydrophilic areas are oriented in such a way that a hydrophilic channel is formed through which water, water-soluble molecules or ions can pass through the cell membrane. Outwardly, however, this structure of seven helices is lipophilic and can therefore be anchored well in the lipid double layer.