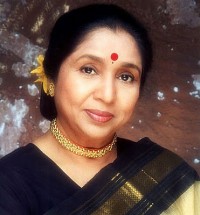 Asha Bhosle was in Satara (Maharashtra / India) on September 8th, 1933 and is the sister of Lata Mangeshkar. She is one of the most famous and successful film playback singers for Bollywood films. Asha has so far recorded over 20,000 songs for thousands of Bollywood films in 14 Indian languages.

Her father was the well-known actor and singer Dinanath Mangeshkar, who trained her, like her other siblings, in classical music and singing from an early age. Her father died suddenly in April 1942, which meant that the family had to move from Pune to Kolhapur and finally to Bombay. During this time, her older sister Lata began to keep the family afloat, mainly through singing, but also with small roles in front of the camera.

When she was about 10 years old, Asha sang in her first film ("Majha Bal"). Asha's debut as a "real" film playback singer was in the 1948 film "Chunariya". At 16, Asha ran away with her 31-year-old boyfriend Ganpatrao Bhosle and married him against her family's wishes. However, the marriage failed because her husband frequently beat her. After only a few years of marriage, she returned to her mother's home with her first two children, pregnant.

Her long-awaited breakthrough as a film playback singer came in 1957. In the film “Naya Daur” to the music of composer Onkar Prasad Nayyar, she was allowed to play the hit titles “Maang ke saath tumhara” and “Saathi haath badhana” written by Sahir Ludhiyanvi and sing "Uden jab jab zulfein teri". Although Nayyar had already discovered her before, promoted her and worked with her in the films "Mangu" and "CID" (1956), he was able to put Asha in this film for the first time as the singing voice of the female lead.

B. R. Chopra, the producer of "Naya Daur", was also enthusiastic about her and in future let Asha sing more often in his films - such as "Waqt" or "Gumraah". The further collaboration between Asha and O.P. Overall, Nayyar was quite successful. The collaboration lasted until 1974 when Asha recorded her last title for Nayyar for the film "Pran Jaye Par Vachan Na Jaye".

The favorite singer of the famous Bollywood film composer S.D. Burman was actually Lata Mangeshkar. However, when the two fell out for a period of five years in 1957 and Geeta Dutt was only available to a limited extent due to private problems, the composer mainly worked with Asha as his female star. They recorded many titles - even after Burman and Lata ended their differences of opinion.

With Rahul Dev Burman's hit album for the film “Teesri Manzil” (1966), Asha suddenly became a “hit queen”. In the 1970s, Burman and Asha's young, western-oriented songs such as "Piya tu ab to aaja" from the film "Caravan" (1971) were enthusiastic. Asha also worked a lot with R.D. Burman, whom she married in 1980, together. (He died in 1994) The music for the film "Ijaazat" (1987) is certainly one of the most remarkable pieces of that time.

Until 1981, Asha had the reputation of a "schnulz singer" and was not taken seriously towards other singing greats such as her sister Lata Mangeshkar or the singer Kishore Kumar, who were known for their vocal diversity. It was during this time that the film composer recognized Khayyam Asha's true talent and in 1981 offered her the opportunity to sing his title in the film "Umrao Jaan". Both Asha and Khayyam received the "National Award" for their film music. Since the beginning of the new century she has withdrawn more and more from the music business, although her voice is just as good as it was about 30 years ago.

Asha Bhosle has sung in almost every Indian language, even Russian and Malay. She sang “Rabindra Sangeet” (the songs of the Bengali poet Tagore) as well as with the Bhangra music group “Alaap”. She worked with all the great composers in Bollywood. Even for Kishore Kumar in his capacity as a film composer (e.g. “Door Gagan ki chhaon mein”, 1964) it was usually the first choice. She has three children and five grandchildren, of whom Chintu Bhosle was a member of India's first boy group "Band of Boys". Asha lives today in "Peddar Road", an area of ​​Bombay.

Referring to her long singing career and her voice, which sounds fresh even at an advanced age, she once said: “I sang for the actress Tanuja over 30 years ago and I also sang for her daughter Kajol. I'm sure I'll sing for Kajol's daughter too ”. In the 1980s Asha was on numerous worldwide tours, including in North America and Europe.

Asha loves to cook and is very good. She even owns a restaurant in Dubai called Asha’s. When she was asked what she would have done if her singing career hadn't been over, she replied "I would have become a cook ...". The rivalry between the sisters was often discussed, even when the sisters always insisted that there was no rivalry. Still, it is believed that Lata viewed Ashas running away with her boyfriend as irresponsible. Asha let Lata take care of the family alone after the death of her father, which would have led to massive tensions between the two.

Lata is also said to have said something "unpleasant" about Asha's relationship with O. P. Nayyar. This created a rift between Asha and her sister and Nayyar decided to never work with Lata again. In recent years, Asha and Lata have often been seen together in public, where they made a "friendly" impression.
Continue reading…

The article Asha Bhosle was last updated on March 9, 2012 by Redaktion
<?