Today we visited the Marvel Avengers Station and attended the show Mystere by Cirque du Soleil in Treasure Island. In the meantime, we also spent time visiting the Mirage and Caesars casinos.

Treasure Island is one of the many themed casinos on the Strip. Even if in this case we could unfortunately only fix it by the external appearance: Two pirate ships were anchored outside. Inside it looked more like a normal casino. 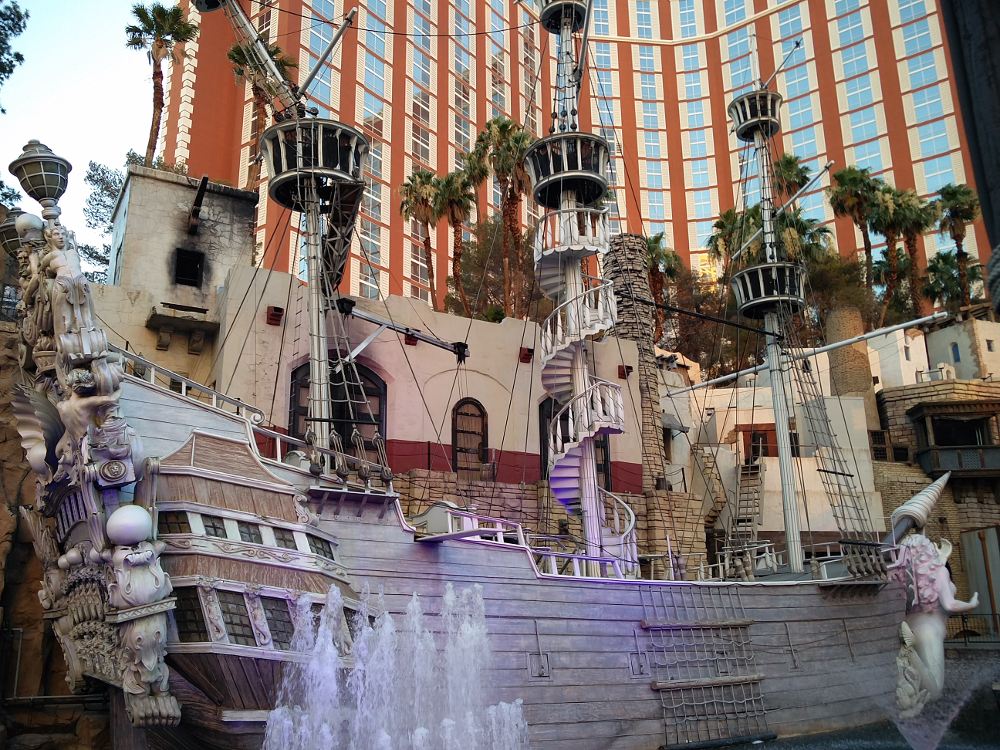 We got tickets for the evening performance of the Cirque du Soleil show "Mystere" before I gave my roommates in the local poker country. I continued to explore Treasure Island and got myself an ice cream with two giant scoops. After all, it was Ice Battle Tuesday. Unfortunately none of my photos could correctly reproduce the size.

I sat down at a machine again - yes, at a Buffalo machine. This automat had done it to me so slowly. Unfortunately, I was finished again relatively quickly. I met my companion just as quickly as I had lost at the machine. He was kicked out of the tournament very early with a very good hand against a much weaker one.

Since we still had a lot of time until the Cirque du Soleil Show and I had noticed that the Marvel Avengers Station was in Treasure Island, we went to it. Even the entrance was clearly marked by the Marvel Avengers: The classic Avengers were set up as life-size figures on a pedestal. 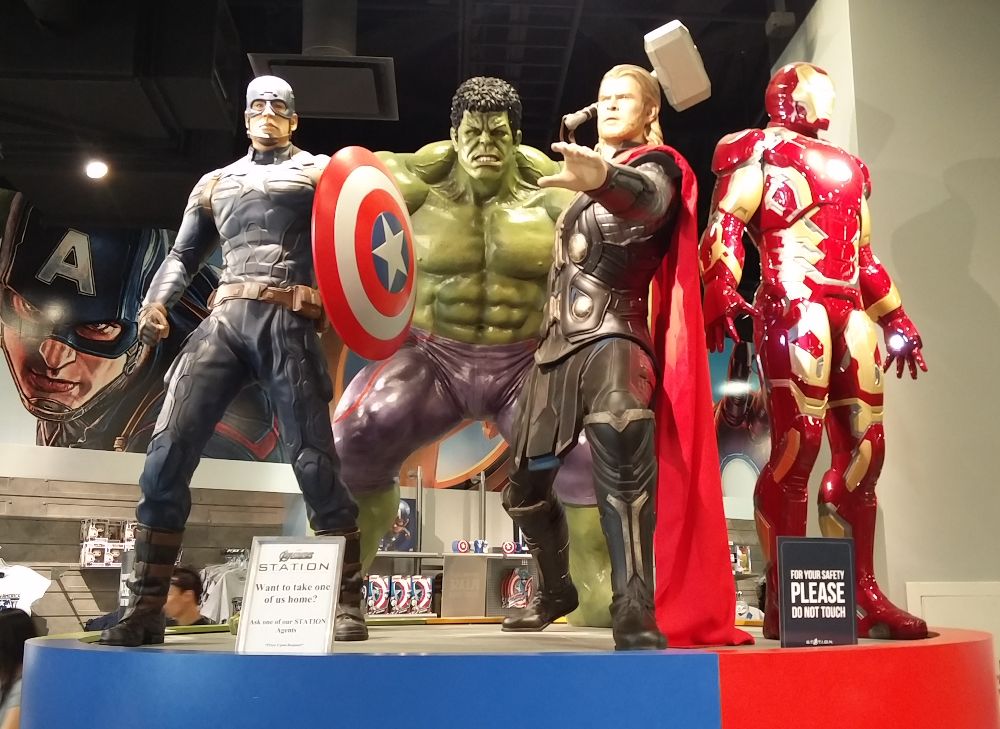 After we had paid, we had the opportunity to take a picture with accessories on a blue screen in order to later be retouched into an Avenger picture. Since the printout would have cost accordingly and we could already examine the results of the other guests, we didn't even start.

Our leadership group was let into a room where S.H.I.E.L.D. Agent Maria Hill over a video screen giving us instructions for our training for S.H.I.E.L.D. Agents gave. Then we were able to penetrate further into the Avengers Station.

The rooms contained panels with information about the individual Avengers. Most of the rooms were exactly right for an Avenger. In addition to the information, there were small game options: enemies could be fought on one device, only the player had to be careful not to shoot friends. On other devices, one's own strength could be tested in comparison to that of the Avengers.

The Hulk and other machines

The press of a button on a machine also explained how the brain changes when Bruce Banner is transformed into the Hulk. There was also the possibility to control the Hulk on a big screen.

The conclusion was a cooperative game in which each visitor represented an Avenger and controlled it with one of the previously distributed control devices. With a specific Avenger power each, various enemies were fought with the final boss Ultron. After that, the Avenger training was finally over.

Outside, the visitor had the opportunity to have an overpriced Avenger ID printed out. We also refrained from this possibility. But it was fun 🙂

Since we still had a lot of time after the Avengers Station, we went into the hot outside. We were happy when we finally got to the Mirage. It was definitely cooler in the casinos. A fountain with exotic plants created a good mood and a great atmosphere. We also had lunch here - a burger with a huge milkshake.

Then we went to Caesars Palace. We already noticed from the name what should be the program inside. And yes, it had a hint of Roman and Greek. We rummaged through some interesting shops - I finally found postcards here, but didn't see any postage stamps. One shop, the Kalifano, stood out. In addition to lots of jewelry, there were also huge figures and accessories from film and television that were reconstructed from scrap. In addition to a Storm Trooper and a Terminator, there are also Optimus Prime, Bumblebee and Smeagol.

Everything was not allowed to be touched. Only the iron throne from Game of Thrones was released to be possessed, which we used. I tried to look serious and bored as possible. Did I succeed right? 😉

Further deep inside the Caesar we saw the Fountain of the Gods. A beautiful fountain under a ceiling painted with a sky. The Cheesecake Factory was also here, and I regretted that I was still full from lunch.

The Atlantis Show took place here every hour on the hour. Mechanical figures moved and talked to each other through loudspeakers. A lot of water and fire were used. On the back of the stage, which stood in the middle of the room, there were aquariums with different colored fish and a ray.

Then we went back to Treasure Island to be back in time for the show. We noticed that there was also an artificial volcano in front of the Mirage, which "erupted" three times in the evening. Tonight it was not the right time and unfortunately we didn't make it on any of the following evenings.

I had read the book "The Blue Ocean as Strategy" * for the first time from Cirque du Soleil and was delighted when I saw that I had the opportunity to see such a show in Las Vegas.

Before the entrance we were almost shocked by the long line. But it reassured us that we had numbered seats. Despite the crowds, we got in quickly and found our seats. People who had problems with this or who were simply dubiously lucky that they were first found by an "usher" were helped by them. The chaotic and confused usher served as a loosening up before the show. He led people to the wrong places in a funny way, made other guests stand up again. Practice throwing popcorn in their mouths with another guest.

The stage, in front of which the audience sat in a semicircle, looked impressive from the very first moment. But only in the course of the performance should we notice how great it was: the acrobats were able to inspire us on several levels. The floor was also simply lowered, leaving a huge hole behind.

At the beginning, a fine announcer in a pink suit with a hand puppet on his arm, drew the audience's attention to the fact that from now on, please no longer photograph or film. Especially not with flash, because that can be very dangerous with art works.

Then the show started. We were right in the middle of it all. Acrobats performed tricks to music on the stage, while other showmen in costumes marched across the aisles between the individual seating blocks. We didn't even know where to look first. Then it got quieter and individual acrobat groups came to show their skills in a theater-like manner.

In some places the acrobats swung over our heads. Yes, we were right below in our seat block. We had treated ourselves to the best category, but the price difference to the next worse category was only ten dollars due to the discount. The remaining two categories would have been much cheaper, but think why.

The audience was also involved in some places, which was mostly in the comedic direction. I don't want to spoil at this point in case anyone of you still wants to see the show.

Everything we could imagine in acrobatic tricks was offered: both on the ground and in the air. Seesaws, ropes and poles were used. The synchronicity and timing of these breathtaking actions were also impressive. These actions were very demanding in themselves. But to do this with other artists at the same time: Simply stunning.

We were so flashed from the show and I thought it was a shame that we didn't make it to see a second one in the remaining time. In any case, I thought to myself during the show that I should do other sports exercises and more sports anyway.

Here is a short video summary to give you at least a small overview - no, the summary is not mine:

After the performance we drove home quickly and went to bed early. After all, the game between Germany and South Korea was tomorrow at 7 a.m.

(* Affiliate link, through which I may receive a small portion of the commission if you order something after clicking on this link. Thank you very much 🙂)