What are connecting towers in ships

The typical pagoda mast from Fuso

The Pagoda mast was a kind of superstructure, as it was common on Japanese large ships, which were reconstructed in the 1930s to improve their combat performance. These changes were considered necessary by the Imperial Japanese Navy due to the "Battleships Holiday" imposed by the Washington Naval Treaty, which severely restricted the construction of new battleships.

Pagoda masts were built on existing tripod masts by stacking searchlights and other platforms, lookout points and shelters. The end result resembled a pagoda temple. The superstructures were built on the majority of the ships that were rebuilt by the Japanese, including the Congo -Class battlecruisers and the Fuso , Ise and Nagato -Class battleships. The additional platforms were carried by the ships' original tripod precursors (a design also used extensively by the Royal Navy) and these were reinforced accordingly to support the extra weight they had to carry. Some of the pagoda masts that were built on Japanese warships in the 1930s were indeed very tall. For example, the top of the pagoda mast of the Imperial Japanese battleship was located Fuso 40 m above the waterline. 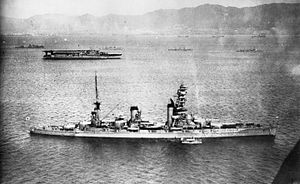 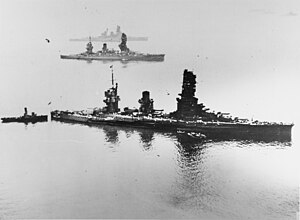 Pagoda masts on the battleships Yamashiro (Foreground), Fuso and Haruna

Like the British Royal Navy, seen as a likely enemy of Japan in the event of armed conflict, the Japanese Imperial Navy wanted to prepare its warships for night-time combat. Before the outbreak of World War II, powerful spotlights were attached to the pagoda masts to illuminate enemy ships at night. However, in the early 1940s, the pagoda-mounted searchlights became less important as new radar technology was developed that would allow a ship to aim and fire at targets at night.

In the navies of Europe and America, tall pagoda-style masts were generally frowned upon. Naval architects and sailors from the Western Hemisphere claimed the Japanese battleships were too "top heavy," and critics often derided these ships by calling them "Christmas trees." What was unique was that the battleship Here received a prototype of the pagoda-style tower mast that would eventually be used for the upcoming battleships of the Yamato Classes that were still in the design phase should be used, rather than the pagoda masts used on their sister ships and other modernized world wars, I-era capital ships.

In the same interwar period, the Royal Navy implemented the connecting tower and bridge in the "Queen Anne's Mansions" style, either retrofitted battleships from the First World War (three of the Queen Elizabeth- Class, HMS Renown ) or for new battleships ( Nelson and King George) V- Classes). Between World War I and World War II, the U.S. Navy gradually phased out the cage masts on its standard battleships in favor of tripod masts, and after Pearl Harbor some of the recovered battleships were reconstructed with connecting towers similar to those on their mail ships. Contract battleships.

The Japanese battleship Ise shows the development of your pagoda mast over time.