What a leader Arvind Kejriwal is

Sanjay dips Indian bread, "chapati", into the bowl in front of him. In it, a freshly prepared lentil dish. He has to go soon. Son Subham sorts rolls of plastic tape into a cardboard box that his father will put in his pocket. There is the smell of chai tea in the air, which Mother Meta has just put on. "The politicians all lie!", Says Sanjay with a smack. "Simple people like me have to pay bribes for everything. I have already put money down for a driver's license, water or even a medical certificate."

The 43-year-old earns the equivalent of around seven euros a day as a motor rickshaw driver. So-called "extra expenses" are particularly painful. Sometimes the power goes out here in northwest Delhi for five hours, explains Sanjay. Behind this is a network of corrupt machinations. The Aam Admi Party, which translates as the "party of the common man", will change all of that. To get the necessary votes together, Sanjay has been campaigning for months with his rickshaw: the poster is stuck on the back of the tricycle, shows every vehicle behind him, here is someone who is fed up with corruption. 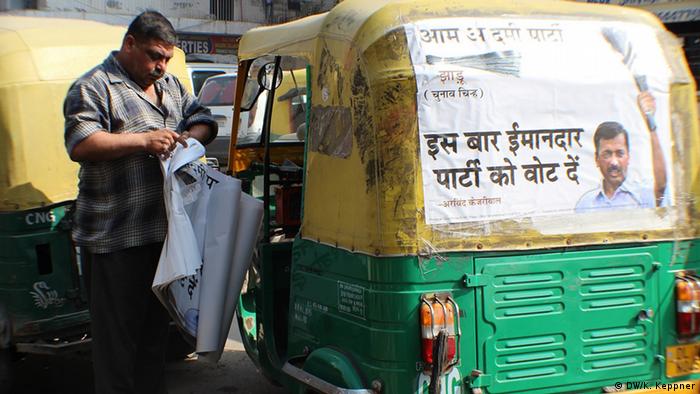 Sanjay is campaigning with his rickshaw, the poster shows the party symbol, the broom, next to the party founder Kejrival

Half an hour later in the party headquarters. From afar Sanjay can see the men in the white caps camped in front of the gates. Thousands come by here every day, the door is always open, says Mahesh, whom Sanjay greets first. The pensioner sits at the reception desk day in and day out. "Entering the name, address and telephone number here does not cost anything," he is explaining to a newcomer who asks about membership of the AAP. To get in the mood, Mahesh gives him some party reading. "Swaraj" is the title of the book. For the Aam Admi party, "Swaraj" is a kind of Bible. "It describes the state in which the Indian people are freed from corrupt elites and politicians and politics is in the hands of the common people," explains Mahesh. India's liberator and resistance fighter Mahatma Gandhi already had this vision, he explains. The party claims that its philosophy has won over 12 million members since it was founded in November 2012.

This shows that a large part of the population wants to do something about the everyday evil of corruption. Mainly the established parties, Congress and BJP, but also many regional parties stand for a system of corrupt clans that has existed for years. Time and again, major bribery scandals shake the public. Legal proceedings are pending against numerous members of parliament, including those relating to funds that have disappeared. The Aam Admi party, which grew out of the anti-corruption movement around civil rights activist Anna Hazare, now wants to usher in a new era on the political stage and, with this declaration of war and its leader Arvind Kejriwal, is running for the national elections. 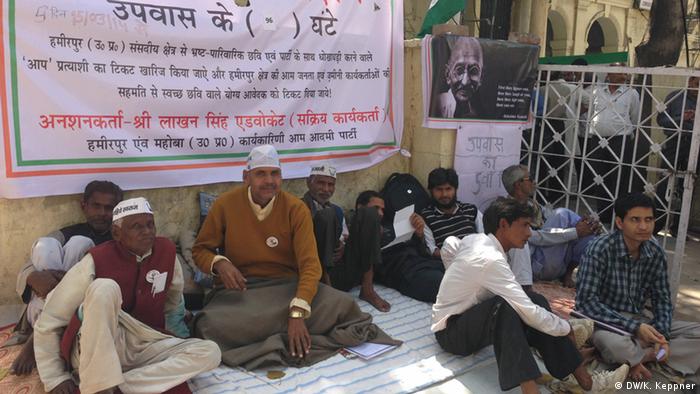 Party members camp in front of the party headquarters in Delhi

One room further behind the reception desk at party headquarters are stacked cardboard boxes: caps, brochures, leaflets - and new posters that Sanjay will later distribute to his colleagues. Cell phones keep ringing. There is a lot going on, because one of the eight candidates that the party wants to send into the race in Delhi is expected soon: Rakhi Birla, journalist, 26 years old. She was part of the cabinet in the capital's state parliament. The Aam Admi party won the regional elections in New Delhi out of nowhere last November and had to prove itself for the first time in political reality.

After 49 days, however, the project collapsed. The reason: The newly elected Chief Minister Arvind Kejriwal wanted to enforce an anti-corruption law in Delhi, but without consulting the Indian central government, which the constitution actually provides. The big parties, Congress and the BJP did not participate. Kejriwal then resigned in the capital, just a few months before the national elections, which begin on April 7 and last for five weeks. That cost the party many votes, says Anil Verma of the Association for Democratic Reforms (ADR), a non-governmental organization that asks voters about their priorities at regular intervals. "Kejriwal relies on the needs of the common citizen, which gives him his popularity here. But approval for him falls slightly within the middle class. Many people wonder why he had to step down straight away and not face a referendum." 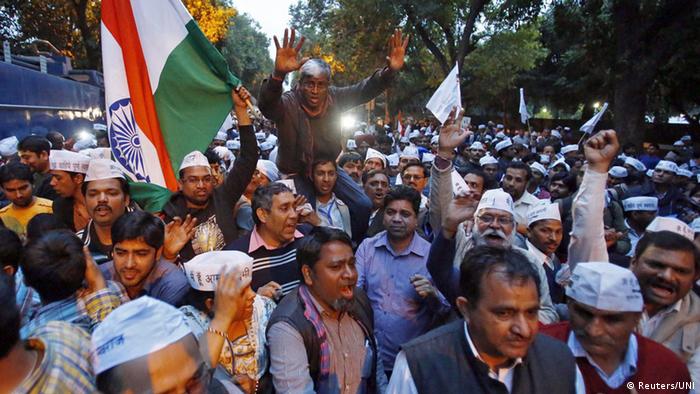 Challenge to the established system: the AAP party has gained over 12 million members since it was founded in late 2012

"He fights for our rights"

Decried as populists and political rebels by parts of the upper class, most of the people here at party headquarters see it differently. 23-year-old Chanvi also believes that the resignation is just the right thing to do in order to remain credible as a party that aims to fight corruption in the country and to win the upcoming parliamentary elections. The economist has given up her job for the party and is now a full-time volunteer, as she says. Her parents are proud of her, explains Chanvi, after all, she is committed to her country. But their expectations of Kejriwal are high. "Today women can no longer go out of the house after eight o'clock in the evening, but if Kejriwal wins the election, we will be able to step outside at any time. He's not fighting for money, but for our rights."

Whether naive idealism or a serious threat to the established parties, nobody dares to predict how many votes the party will ultimately win. What is certain is that the "party of the common citizen" has become a reservoir for all those who want to defend themselves against the established nepotism and corruption that rickshaw driver Sanjay experiences every day. He has now fully loaded the back seat of his rickshaw with new posters that he wants to distribute to his colleagues. "The Aam Admi party will clean up India and put an end to corruption," he says, getting into his rickshaw. He has a little time left until the election in Delhi on April 10th.