When can I have a robot butler

Eleonora Chiarantano is 23 years old and is studying Artificial Intelligence and Robotics at the Sapienza University in Rome. Since 2018 she has been part of the SPQR team, which was able to secure participation in Robots in Residence in Rome. As part of this residency program, she and her colleagues equipped the NAO GAIA robot with new skills.

As a member of the SPQR team, you were involved in the programming of the GAIA robot, which you equipped with new skills. Can you explain to us why you programmed it in such a way that it can also perform playful activities, among other things?

The central aim of the project was to program a robot that can successfully come into contact with people in chaotic environments such as trade fairs or public events. In order to get appropriate attention in these situations - in which we are also exposed to numerous other stimuli - NAO had to be able to perform extremely engaging activities. We decided to play, dance and move because these activities encourage participation. The general idea is to use playful activities as an "intermezzo" while at the same time conveying more important information, for example about safety regulations or commercial offers.

Why did you choose to study computer science and robotics?

I've always been fascinated by the potential of computers. As a child, I liked to spend my time in front of the PC and play computer games or experiment with Paint, Word and PowerPoint. As I got older, I came into contact with the Internet and later with programming. Eventually I got interested in robotics. It was kind of a natural development, I didn't think about it much. I wanted to do something new, exciting and socially useful at the same time, and robotics combined all of these things.

Do you think women are still disadvantaged in computer science? How do you work with your male colleagues?

Of course, in computer science - as in all scientific subjects - men make up the majority. But I don't think that's a question of discrimination, at least not today. The number of women who decide to study computer science is increasing from year to year and this development is viewed very positively and, above all, promoted. I've always felt comfortable at university. In general, our year is mixed up, both in terms of the age and origin of the students. Nevertheless, we are all friends with each other, nobody is discriminated against. 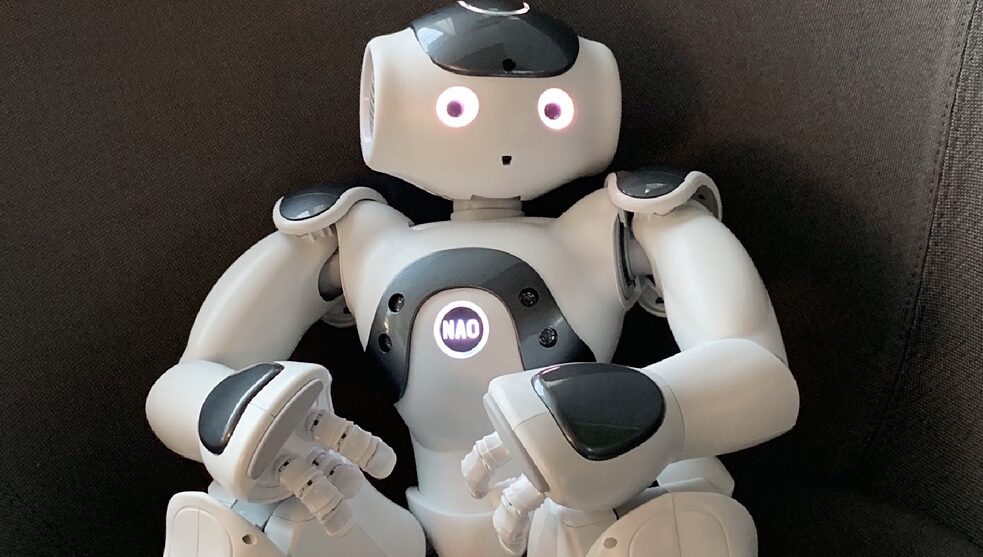 © Goethe Institute
What is it about robotics that fascinates you?

The enormous potential it offers, especially when it comes to making people's lives easier. I'm not only thinking of the automation of repetitive, physically difficult work in industry, but also of all applications that support people in everyday life, especially people with special needs. Just think of prostheses that are becoming more and more similar to human limbs, devices that enable paralyzed people to communicate, medical instruments that help make operations more precise and safer, as well as social robots and rescue robots (for rescuing people in Danger) as well as household robots.

In your opinion, which requirements must be met so that robots can support people in everyday life?

The ability to interact is undoubtedly a key skill. And it must be possible in all conceivable forms. One of the areas on which research is very much focused in this context is precisely the area of ​​communication. Of course, the robot must also be built in such a way that it can perform all the movements that are necessary to successfully perform the various tasks - from the very simple to the highly complex and also those that may require considerable physical strength.

As far as social robots are concerned, I believe that they must be able to adapt accordingly, i.e. to understand the context in which they are located and to adapt their behavior accordingly. In addition, the cultural context will also play an important role. Last but not least, it is just as important that robots are safe in every way. They also need to be protected from any kind of external computer attack that could affect their functionality.

Will it really be perfectly normal for everyone to have a robot at home in the near future? Is that really something that is desirable for our society?

If you look at robots as devices that have a certain degree of autonomy, then you could argue that these are already widely used in our households today. Let's think of vacuum robots, for example. In the general perception, however, a robot is often a device that simulates human behavior. It is unlikely, however, that we will all have a humanoid “robot butler” at home, as we know him from science fiction. We are talking about sophisticated, expensive technology with limited utility. On the flip side, non-humanoid robots that are able to do household chores like cooking and cleaning can potentially be of great benefit. I think their dissemination will be greatly encouraged in the near future. In general, the massive use of robotics is definitely desirable for our society - provided that society also defines clear rules and limits for their use. Robots are supposed to make people's lives easier, but they can never really replace people.

Many believe that robots will be our digital slaves. What can we say to these people to dissuade them from their belief?

If you consider that it is possible to design robots that make human work easier or even replace it, it is to be expected that these will be able to take on the toughest and most arduous tasks in the future, thereby replacing the toil of those people who do this work today To run. However, a robot can only simulate human emotions; it remains an electronic device. He doesn't feel any effort or real feelings. It is a device that supports humans in some way, not a living being. The idea of ​​a digital slave is thus lacking in its foundation. It would be more correct to think of a robot as a digital assistant.

Are there any coding ethics for you? And what does that mean for you?

The question of ethics in computer science is much debated and not easy to answer. There is already a code of conduct for programmers and software engineers (from the Association for Computing Machinery), which lays down ethical rules for developing software and working in teams. Things get more complex when we talk about an artificial intelligence ethic. What makes it so complex is the difficulty of reconciling the complex system of human values ​​with the purpose for which artificial intelligence is being used. For example, consider the following scenario: A self-driving car is traveling at high speed, when suddenly a pedestrian appears who wants to cross the street. It is not possible to stop in time due to the high speed. The car can either avoid the pedestrian with a quick maneuver, with the risk of the vehicle skidding and killing the occupants, or braking to reduce the impending impact. These are the moral dilemmas that are currently being investigated as there is no generally accepted solution to them.

What challenges and risks do you think can be expected for the near future in connection with decision algorithms?

A whole range of different challenges await us. In addition to developing new architectures and systems and optimizing their efficiency and problem-solving capacity, one of the greatest difficulties in my opinion will be to solve the philosophical and ethical problems that come with these inventions. In order to be able to ascribe responsibility to an agent in both a positive and a negative sense, he must be able to explain his actions. This is only possible if algorithm architectures and data structures are developed that make it possible to understand the logical path that causes the agent to perform a certain action in a certain situation. This problem, which links ethics and computer science, may appear to be secondary compared to the invention of artificial agents, but it will become primary if these are then to be integrated into society.

How would you like to use the knowledge you acquired during your studies in your professional life?

My biggest dream would be to be able to work on something that can help people - be it to cope with their everyday lives, be it to lead a fulfilling, happy life. In recent years I have been particularly interested in applications in the medical and neurological field. We'll see what the future will bring.
<?