Where is Mandrake growing 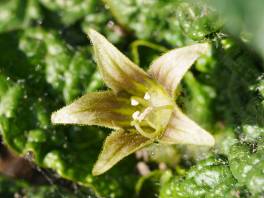 The mandrake is the classic magic plant of antiquity and the Middle Ages.

Its roots were in great demand and were considered to be magical because their shape resembles the shape of people.

The mandrake is highly poisonous and leads to dangerous high states that are potentially fatal.

Nowadays it is only used medically in homeopathic doses.

Since the mandrake is very poisonous, it is no longer used in medicinal herbalism these days.

In homeopathy, however, it is often used because it is harmless in a highly diluted (potentized) form.

From the D4 potency, the homeopathic remedy Mandragora can be obtained without a prescription in pharmacies.

In low potencies, up to and including D6, it is used in a similar way to how the medicinal plant mandrake used to be.

The homeopathic remedy is used against insomnia, asthma, depression and joint pain.

Mandragora is also used against various diseases of women, for example against infertility. It is also said to cleanse the uterus and promote menstruation. 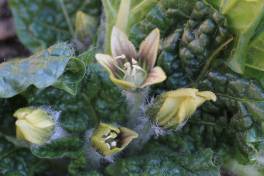 The mandrake has a history of thousands of years as a medicinal and magical plant.

Already in ancient Babylon the mandrake was used around 2000 BC. Mentioned in cuneiform tablets as a remedy for toothache.

The mandrake was also used against pain in ancient Egypt. It can be found in the Ebers papyrus under the name dja-dja.

The mandragora is also said to be a gift from the Greek-Egyptian god Hermes Trismegistus. It is suitable for alchemical practices and necromancy.

The golden apples of Aphrodite are probably the fruits of the mandrake.

The mandrake may also be the famous Moly of Kirke. Therefore it also bears the name Mandragora Circaea, which was given to it by Pliny. However, there are also numerous other plants that are interpreted as the fabled moly.

Some also suspect that the mandrake is identical to the biblical, aphrodisiac plant dudaim (Genesis 30). The dudaim are candy apples that are said to have helped Rachel get pregnant with Joseph.

Pliny reported on the medical and psychoactive effects of mandrake as early as the 1st century AD. 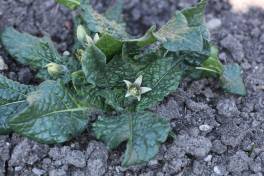 Hildegard von Bingen describes the mandrake as human-like and assumes that it comes from the earth from which Adam was created. But Saint Hildegard doesn't think much of the mandrake, because she fears devilish whisperings from it. In order to remove the harmful influences of the plant, it should be cleaned in a spring before use.

Strangely enough, Hildegard recommends the Mandragora against excessive sex drive. Men should use a female plant and women should use a male plant. This is all the more astonishing as the mandrake was usually touted as an aphrodisiac.

In the Middle Ages, but probably even earlier, the mandrake was used as an anesthetic in operations. A tea made from mandrake root, mulberry juice, poppy seed extract, image herb and hemlock was made and drizzled on a sponge. This sponge was held in front of the patient's nose until he fell asleep. After the operation, the patient was woken up again with the scent of fennel oil.

Inhaling fruit through eating or fragrance induce sleep and numbness.

Thickened juice from the bark and root was kept as a medicine.

The mandrake was also considered to promote fertility.

Mandrake wine was drunk against insomnia, although there was always the risk that one would not wake up from the sleep gained in this way.

Paracelsus complains a lot about the rascal who is driven with the mandrake. Many dealers would cheat their customers with fakes mandrake. In addition, far too much magical healing power is attributed to the mandrake. 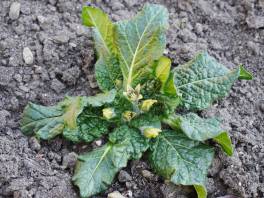 A mandrake root placed on the mantelpiece is said to bring prosperity, fertility and protection to the house. It is even said to be able to cast out demons with it.

You also put the root next to you in bed or at the head of the bed to protect the sleeper and keep them from melancholy.

Worn as an amulet on the body, the mandrake root is supposed to act as a means of love and also protect against diseases.

If you put money next to a mandrake root, it is supposed to double it.

A dried mandrake root is sometimes activated first in order to awaken its supposedly dormant powers. To do this, the root is placed in an important part of the house for three days. Then you put them in warm water and leave them there overnight. Only then can the mandrake root, which has now been activated, be used for magical purposes. The soaking water can be splashed on objects or people to protect them.

The mandrake is native to the Mediterranean. Since it is sensitive to frost, it can only be found in frost-free areas.

The thick root of the perennial plant can be up to 60 cm long.

The root is often split lengthways, often several times, so that the shape can be interpreted as a man with legs and arms.

A rosette with elongated, egg-shaped leaves grows from the root. The leaves are wavy and serrated on the edge.

The purple flowers appear in spring and grow in groups directly from the rosette.

They are bell-shaped and have a long calyx. Their shape is somewhat reminiscent of the flowers of the blue gentian, to which they are in no way related. 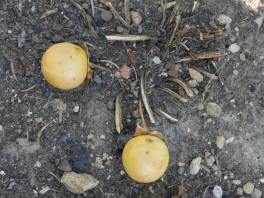 The fruits are reminiscent of small apples. The foliage of the mandrake has completely retired by the time the fruit is ripe. If you do not know that a mandrake is growing at this point, you could at first glance mistake the fruits for small fall apples. However, they are stuck to the ground with a stem that comes out of the center of the mandrake plant.

When ripe, the fruits are non-toxic, so theoretically they can be eaten. Their taste should be reminiscent of tomatoes. Because of the risk of catching unripe, poisonous fruits, one should refrain from eating mandrake fruits.

The sister of the mandrake (Mandragora autumnalis) blooms in autumn.

Except for the different flowering times, both mandrake species are very similar.