How does the resolution of microscopes develop?

By controlling the electron beam, researchers achieve a record resolution of half an angstrom 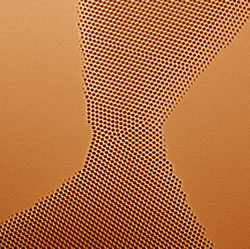 Gold crystal under the electron microscope

Berkeley (USA) - Individual atoms have been observed with electron microscopes for years. Researchers are now also focusing on the connections between atoms and their spatial structure. This is made possible with a new transmission electron microscope with aberration correction, called TEAM for short, which a German-American working group has now developed. With a resolution of only one twentieth of a nanometer, this instrument sets a new world record.

"TEAM can be used to identify every type of atom in every position within a structure," says Uli Dahmen from the Materials Sciences Division at the Lawrence Berkeley National Laboratory. The researcher achieved this previously unachieved goal together with other American institutes, the microscope manufacturer FEI and the Heidelberg company CEOS. Responsible for the resolution record of only half an angstrom - that is about a million times smaller than the diameter of a hair - is the successful correction of an optical distortion of the images, the spherical aberration.

To achieve this, Dahmen and colleagues accelerated an intense electron beam onto a sample of gold crystals. In order to get the sharpest possible images of individual atoms, the researchers controlled the electron beam with a series of multipole magnets. These act like focusing lenses on the charged particles and thus efficiently reduce the distortion of the microscope images. At the same time, the contrast of the images could be increased. In addition, TEAM images with a somewhat weaker resolution of a tenth of a nanometer can be obtained with relatively low acceleration voltages of around 80,000 volts. This should enable the new microscope to also be used for sensitive biological samples.

The TEAM microscope could be available to other research groups as early as October this year. And as early as next year, Dahmen and colleagues are expecting a successor product that will eliminate another imaging defect in electron microscopes, namely chromatic aberration.