Which city is better Agartala or Shillong 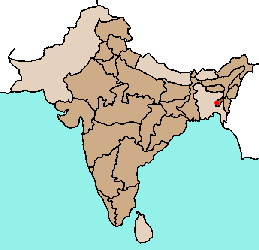 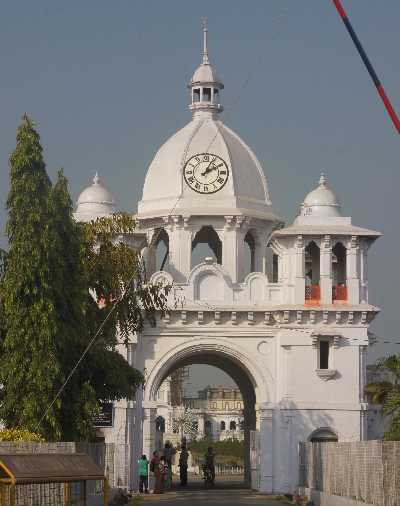 The gate to the palace complex clearly has British features 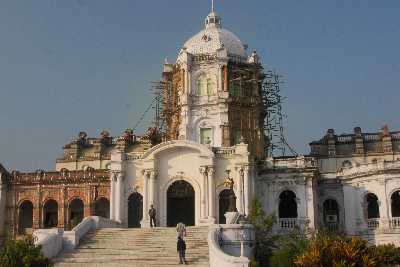 Entrance to the Ujjayanta Mahal 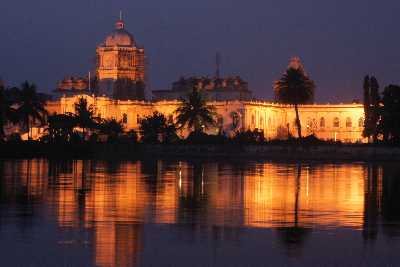 In the evening, the Ujjayanta Mahal is reflected in the Lakshmi-Narayan Sagar

The gate to the palace complex clearly has British features

who should travel to Agartala, the former capital of the Principality of Tripura? This little-known region at the end of India - almost completely enclosed by Bangladesh and only accessible via long detours - sees fewer foreigners than any other freely accessible Union state. The massive influx of Hindu Bengali immediately after the partition of India and the forcible annexation of the princely state by the Indian army also created social and political explosives, and until the 1990s the area, like the whole of the northeast, was practically isolated from the outside world.

In the evening, the Ujjayanta Mahal is reflected in the Lakshmi-Narayan Sagar 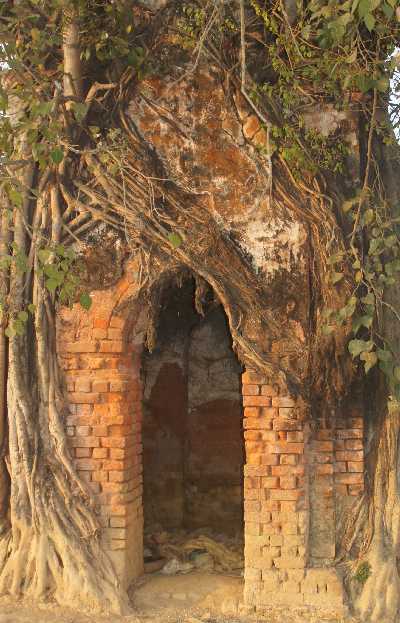 In the grip of the strangler fig 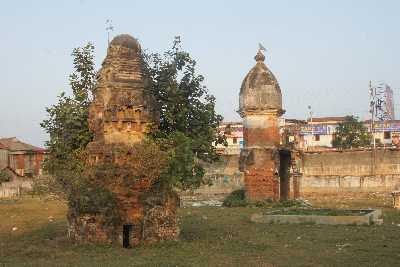 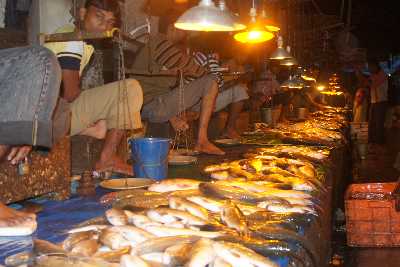 The original inhabitants of Tripura are the Borok, who are mostly called Tripuri by the Indians. They speak the Sino-Tibetan language Kokborok and are mostly Hindus; but you can hardly find them in the cities. Agartala makes a purely Bengali impression, at least in the city center, and at most every tenth passerby on the street shows Mongolian facial features. The Borok are practically foreign-controlled in their own country, and this explains the sporadic flare-up of violence from separatist rebels who want to turn back the wheel of time. What a difference to Shillong, where the indigenous mountain people are so successfully asserting themselves in the midst of Indian culture!

In the grip of the strangler fig

The Ujjayanta Mahal city palace, which is now the seat of government and can therefore only be visited with great difficulty, is a reminder of the heyday of the Borok Empire. On its south side are two rectangular ponds, in which the white building is reflected in a very attractive way, and in the evening it offers a very impressive sight with its modest lighting. Otherwise there are only class B sights in the city, including a small field with half-ruined Shiva temples from which strangler figs and other trees are sprouting. This reminds a bit of the famous Ta Prohm temple in the group of temples around Angkor Wat in Cambodia.

Why am I visiting this city reached from Shillong in a nerve-wracking 23-hour bus tour? Agartala is only a few kilometers from the Bangladesh border, and since there is a consulate with visa service here, I thought it would be a good idea to say goodbye to India; my residence permit would allow me to stay in Agartala for just 5 days, and then I would hop across the border on the last day of validity. But it turned out differently: this one Visa Office namely only issues short-term visas that cannot be extended at a later date; But I can't go back to India for two months at the earliest, and there's nowhere else to go from Bangladesh by land. I should get a visa in Kolkata, was the unhelpful suggestion from the consulate staff. In response to my objection that I only had five days in India and that the way to Kolkata alone would take at least two, the chief pickle trooper said that it wasn't a problem, I should just fly. My sympathy for Bangladesh fell in a flash below the temperature of the cosmic microwave background.

Three hours later I had one emergency ticket the Indian railroad that takes me to Lumding in Assam overnight; from there it shouldn't be much more than 15 hours to the Nepalese border (after pure driving time). It looks as if I will be spending the next two months in the Himalay, due to the winter with gleaming views and freezing cold.

After this dawning day, which I spent visiting Agartala, I had only one more day left before I had to leave. There are two famous attractions in the area: the temple city of Udaipur and the Neermahal palace complex. I chose the latter and haven't regretted it.

The Neermahal in Melagarh looks like out of this world 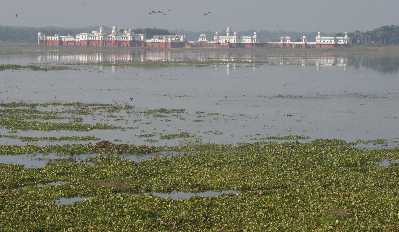 The Rudra Sagar is slowly growing 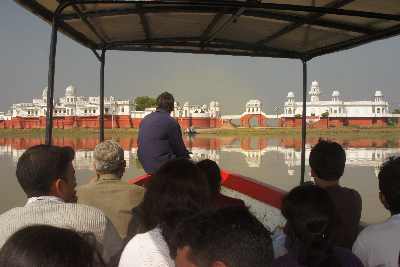 There is something magical about the journey by boat

Did I say "Magical"? 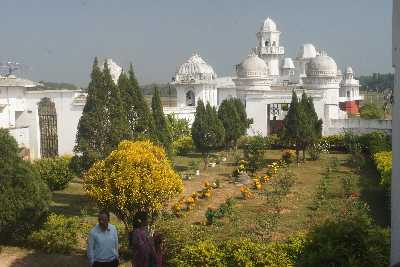 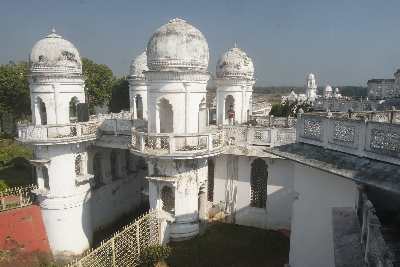 An hour and a half journey in a crowded jeep takes you from the bus station in Agartala to a small town called Melagarh; From there you walk less than ten minutes until you come to a murky lake half covered by water hyacinths and floating gardens. In the middle of this Rudra Sagar shimmers a red and white palace, which in this idyllic setting creates a picture of almost unearthly beauty. The impression is enhanced when you take a boat to the pier in the middle of the palace facade and the Nir-Mahal ("Water Palace") slowly grows to its full size.

The elongated building complex was only built in the thirties, but is now completely empty and abandoned; only the gardens are still maintained. You can stroll across the dazzling white roof landscape with a bunch of domestic tourists, mostly Bengali from the upper middle class, and take photos of romantic ensembles of turrets and chattris against the background of the lake or the deep blue sky.

There are around 4 trains a day at this station

The very next day I had to leave the city and subsequently India. The huge, snow-white train station is only two years old and was planned for many times the actual number of people - but so far only a handful of trains per day run here. They pounded nervously slowly along the one-meter lane into eastern Assam; the furthest connection leads in an unbelievable 20 hours to Lumding, still far to the east of Guwahati. If you want to leave Northeast India (like me), you have to change trains at least twice. But since even Indians are only at last capable of suffering, many prefer to take the bus.

Two days in Agartala are actually too little for everything; in particular, I was able to find out practically nothing about the culture, way of life and cuisine of the Borok. That is a real shame, but in view of the Bengali overweight in the city, it could not be avoided. I have to leave open whether what I ate here was typical of Bengali cuisine; Since I won't be coming to Bangladesh in the foreseeable future, I will probably have to wait quite a long time for guaranteed real Bengali taste experiences. My last meal, a biryani-like boiled short grain rice with hazelnuts, raisins and an extra portion of cinnamon and cloves, contradicted everything I have ever read about Bengali cuisine, but it was extremely tasty. 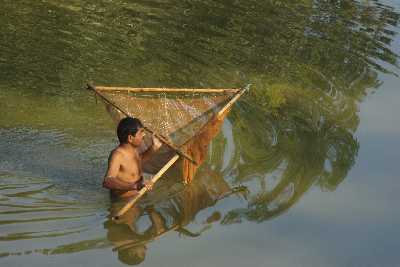 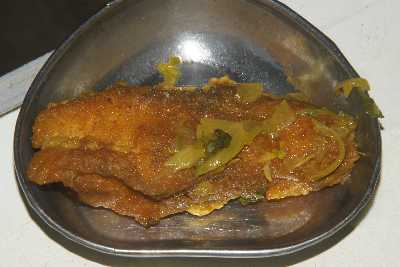 The trip to Neermahal gave me the opportunity to try Bengali fish. Bengali eat a lot of fish, which apparently thrives in the numerous rivers and ponds (or at least did so until the beginning of the industrial age). Very close to the departure point for the boats to the palace, I was able to watch a local fisherman catching a fish in a murky pond with his cash, and so convinced of the freshness of the material, I tried it two corners further in a restaurant fried fish. It turned out to be edible, even if it was prepared a little unimaginatively: seasoned, grounded, fried and topped with a few fried onions.

With that India is over, and you will receive the next letter once again from the Himalayas; Delays must be expected in view of the Stone Age infrastructure and the winter conditions in the mountain villages of eastern Nepal.

P.S .: Two years later I came to Kolkata after all, got a Bangladesh visa and set off for the unknown country.