Preparations for First Communion are currently in full swing in many parishes. Christian Bauer, an affected father, reports on this serious case of lived Christian contemporaneity: Where in our post-Christian world today are there still contemporary cultural points of contact for the Gospel?

What am I doing with these two guys? You are never involved. At least it seems so. They live entirely in their digital Ninjago tablet DVD world. Analog? No interest! Not even in the preparation for first communion. And this time it's not the turn of friendship or bread-baking, but of all things the Last Supper - a topic that is central to First Communion, but also not that easy. What most carpenters like to avoid in preparation: You do it, after all, you're a theologian ... So what do you do?

I've tried Harry Potter. We started in the analog world, with my children's Lego Hogwarts castle. Who Knows the Story of Harry Potter? The complete plot is quickly fetched and retold based on the Lego men. Harry Potter and his friends versus Lord Voldemort and his Death Eaters. How was that again with the Muggles and the Mudbloods? The girls and boys know each other amazingly well for their age. Then a child asks what all this, if you please, is supposed to have to do with First Communion. I think: Great ... But another child comes to my aid and says: “A lot! Once Dumbledore says that love is stronger than anything else in the world. And that's what communion is all about. "

Then it gets trickier - a little quiz question for all Harry Potter professionals: What do these seven film images have in common? You can see the seven horcruxes in which Lord Voldemort deposited part of his soul with every murder committed in order to obtain eternal life: Deathly Hallows. And then the inevitable catechetical question: seven horcruxes - who knows something that we Christians have exactly seven times? Nobody knows. But the children quickly understand: seven death horcruxes with Voldemort - seven life sacraments with Jesus. Twice the same thing completely different. 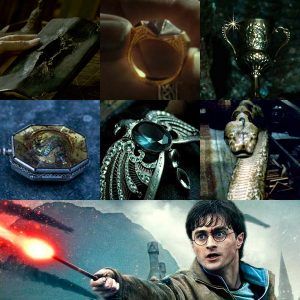 We are looking for more similarities and differences. Voldemort is a fictional character, Jesus really lived. Voldemort spreads fear and horror, Jesus love and happiness. Voldemort sacrifices the lives of others, Jesus his own. The evil life force of Voldemort is in the seven Horcruxes, the good life force of Jesus in the seven sacraments. The main Horcrux of Voldemort is Harry Potter, whom the Dark Lord kills in the end. And the most important sacrament is Jesus himself, who lives on among us in communion. A child added, very excited: “Then Harry Potter is like Jesus! He also sacrificed himself so that Voldemort could be defeated - he dies, but lives on anyway! ”Didn't someone even talk about children's theology? Children are excellent little theologians!

"I told you that right away."

Then another catechetical classic has its appearance: Jörg Zink's Children's Bible The morning knows more than the evening. During this narration of the Last Supper, the children draw what they have all heard somewhere as a story. And we're looking for more similarities to the Harry Potter story. Jesus is wanted by the Temple Police, Harry Potter by the Death Eaters. Jesus had enemies because he proclaimed God's love for all people. Harry Potter for being against Lord Voldemort, who despised Mudbloods and Muggles. Looking at Jesus, who washes his friends' feet like a slave, a child finally says: Then he's like the house-elves in Harry Potter! And then there is also the last word in Jörg Zink's Jesus story - love. "I told you that right away," says the child who saved the whole thing so brilliantly for me at the beginning.

The circle closes. We pray together. There is a small snack and a round of football at the end. It was certainly not the best of all possible catechetical group lessons. And I don't know what the two boys mentioned at the beginning took away with them - I and the other children at least enjoyed it. And maybe the two boys too - but they don't show it that way.