You should create a benchmark that stands out from the standard benchmarks. I chose Ray Dalio's investment vehicle and Warren Buffet with his Berkshire Hathaway stock; more about Ray Dalio below: 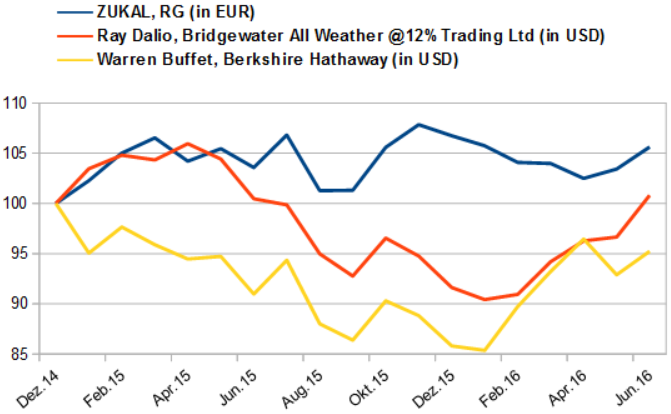 The cradle of the revolution is in the forests of Connecticut. A few kilometers outside the town of Westport, Ray Dalio has developed a new method of distributing his customers' money between stocks, bonds and commodities in such a way that it grows in any economic environment. The 66-year-old is so successful that Bridgewater Associates, founded more than 40 years ago, is now the largest hedge fund in the world, with $ 160 billion under management.

Ray Dalio is often hailed as "Steve Jobs of the Financial Sector". But how successful are he and his risk parity model really?

The first piece of wisdom that you will blow on the ears of investors and those who would like to become one: Spread widely, don't just bet on one horse, because it could be the wrong one! So if a hedge fund manager follows exactly this wisdom, he does not initially stand out from the crowd of investors. Still, Ray Dalio is special. Not only because, with Bridgewater Associates, he runs the largest hedge fund in the world, but because he has, so to speak, perfected the old stock market adage of broad risk diversification.

The two most powerful products in its portfolio by far are "All Weather" and the "Pure Alpha" launched in 1989. The investor takes a different approach than his colleagues. He wants to generate constant returns over the longest possible periods of time.

Good results at all times

The goal of long-term returns makes Dalio particularly interesting for institutional investors who need to generate secure income. No wonder that many pension funds, universities and charitable organizations are among his customers. "All Weather was born out of Bridgewater's effort to understand the world and hold the portfolio today that will reasonably be successful in 20 years - even if no one today can predict what kind of growth and inflation will prevail," says in a fund presentation.

Or as Bob Prince, Co-CIO at Bridgewater put it: What is important is a strategic asset allocation that delivers good results - whatever the world throws in your way.

A Ray Dalio also started out small. The American, born in 1949, is said to have had the awakening experience at the age of twelve. Today's star investor bought shares in Northeast Airlines for $ 300, which multiplied in value. In 1975 he founded the Bridgewater investment firm. Today he has amassed around $ 15.2 billion in fortune.

For a while it looked like the world would lose him. In his youth he made a pilgrimage to India in the footsteps of the Beatles, where he met their guru Maharishi Mahesh Yogi, who introduced him to "Transcendental Meditation". Paul McCartney had Maharishi Mahesh in mind when he composed the song "The Fool on the Hill" for the Beatles.

Dalio has been practicing this technique of mediation, which is supposed to cleanse the mind of irrational views, to this day. The ambassador of this school is also the famous film director David Lynch, whose films immerse the viewer in a "strange and strange world".

Some visitors to the Bridgewater headquarters might also feel strange. In his company, Dalio wants to encourage employees to adopt a culture of "radical truth and radical transparency" - and to encourage constant self-criticism. Employees are encouraged to publicly discuss their mistakes and weaknesses in order to improve, writes the Bloomberg news agency. These conversations would be recorded, as would virtually all meetings at headquarters. Incidentally, this also applies to Dalio himself. He is looking for human and professional perfection and he expects the same from his employees.

His interest in a kind of philosophy has also remained. "Our greatest strength is to know that we know nothing," the hedge fund manager quotes the philosopher Socrates, who can safely be described as the inventor of self-examination by means of reason. Unlike the Athenian, Dalio will leave behind a few billion dollars and a written work.

Ray Dalio created the Bridgewater's "All Weather Fund" strategy to invest his family's money. If one day he is no longer there, a storm-proof investment model should ensure that the Dalios keep their assets.

To do this, Dalio determines the weight of asset classes such as stocks, bonds and commodities according to the volatility of their rates and prices. He determines the risk he wants to accept as an investor and then distributes this risk budget evenly across four baskets: stocks, commodities and high-yield bonds should benefit in phases of increasing growth rates. Bonds are intended for times of declining growth rates. Inflation-hedged bonds and commodities are supposed to protect assets when inflation rates rise, stocks and bonds when inflation rates fall.

Which investments Bridgewater makes and which not does not depend on correlation data, unlike the competition. Rather, potential investments only have to meet two criteria, which Dalio sees as set in stone: "timeless and universal". Everything else is done by the computers. "99 percent of the decisions are made by the computer, according to my rules. It's like driving a car with a navigation system." In this way, Dalio created the "All Weather Fund" and the "Pure Alpha Fund", Bridgewater's two flagships, which are supposed to make a profit even when the world sinks into financial chaos. Proponents of the risk-parity strategy like to refer to the performance of the Pure Alpha Fund during the financial crisis, when it was 10 percent up, while all other hedge funds suffered heavy losses and even a Warren Buffett did not get off scot-free.

Even a Ray Dalio is not infallible

Critics of the approach, on the other hand, prefer to look to 2013 (or now also to 2015), when the All Weather Fund temporarily lost more than 10 percent. Of all things, Dalio's core principle, according to which weak performances are offset by strong performances, had failed: Actually, inflation-linked bonds should have increased in anticipation of rising interest rates as a result of the Fed's announcement in 2013 that it would reduce its loose monetary policy. But the opposite happened. All display classes went into the basement in parallel and the risk-parity model suddenly seemed to be undone. Opponents mean now that they know the explanation for this. In her opinion, Dalio's strategy only works if bond prices rise and interest rates fall. But Ray Dalio is not deterred by such voices. He believes in his model and continues to work on his Holy Grail. This unwavering belief in himself and his ideas, his many ardent followers and his eccentric lifestyle earned Dalio the title "Steve Jobs of the Financial Sector". As is well known, the Apple boss could not be dissuaded from his path and it turned out to be the right one. Will that also apply to Ray Dalio and his risk-parity model?

Almost 20 years later, a quarter of the US pension funds are already using this investment approach, and almost all major investors there are familiar with the so-called risk-parity strategy, which goes back to Dalio's "All Weather Fund". Dalio's fund achieved an average return of more than 6 percent per year.

The financial crisis of 2008 caused a strong increase in interest, when many risk-parity funds reduced the proportion of shares in the portfolio in good time and thus at least limited losses. Large US investors are hoping that the risk-parity strategy can now help them to survive the uncertain times in which they can no longer earn anything with many bonds.