00 Buckshot are the size of 9mm

Original European honey bees were far smaller than we are used to today. As data from Cowan (1890) show, the natural diameter of a worker cell at that time was 4.72 - 5.36 mm. The cells in the brood area measured an average of about 4.9 mm. By introducing the artificial middle walls, it was possible to enlarge the cells and consequently also the bees themselves. This process took place in Europe mainly between 1890 and 1920. Since then, most of the middle walls have a cell diameter of approx. 5.5 mm. In the beekeeping literature of later decades this artificial enlargement of the honeycomb cells or the bees themselves is hardly mentioned any more. Obviously, the given size was accepted as “natural”, since the natural construction also took on the larger dimensions with a little delay.

Unfortunately, the vitality of the bees has suffered considerably from this unnatural enlargement, but this has only been fully noticeable since the spread of the Varroa.

Beekeepers Dee and Ed Lusby from Arizona discovered this fact about ten years ago and published it. The conversion to the largely natural cell size of 4.9 mm in their company with around 1000 colonies brought about a very significant upswing.

Experience of the Lusbys, but also of many other beekeepers from North America and now also from Europe, indicate that bee colonies who stably established on flawless 4.9 mm construction have decisive advantages.

Successful conversion to a cell size of 4.9 mm will solve a lot of problems. But: Unfortunately, this change in itself is a serious problem that is by no means easy to cope with. Our bees have been selected on the artificially enlarged cells for almost 100 years. This means that most of the strains have lost the ability to build and incubate the small-cell honeycombs on a genetic level. Under stable establishment on perfect 4.9 mm construction it is to be understood in particular that the colonies can build up 4.9 mm middle walls without irregularities and incubate them properly. In order to achieve this state, a lengthy conversion process is necessary, which is usually accompanied by a change in the origin of the bees or a strict selection.

Since middle walls with a cell size of 4.9 mm have also been offered by a Bavarian manufacturer since March 2002, some beekeepers have experimented with this conversion, unfortunately only a few with success. Erik Österlund from Sweden, who was the first European beekeeper to deal with this problem, describes his first experiences as follows:

"In the summer of 2000 I tested 70 of my 100 colonies and gave them dividing walls with a cell diameter of 4.8 mm. A whole room with 12 half-high frames was set up for each. 1 (!) Volk built the dividing walls surprisingly perfectly (Fig. 1 ) 5 colonies brought good results, 10 more did the job satisfactorily. Some colonies were only wintered in 4.8 mm cells in autumn 2000. 10 colonies were not at all able to expand the middle walls. Ugly honeycombs were created, which I melted down The remaining 44 colonies also gave unsatisfactory results. They had to be converted to an intermediate size - 5.1 mm. "

Two phenomena can be observed in the expansion of small-cell central walls in unsuitable colonies: 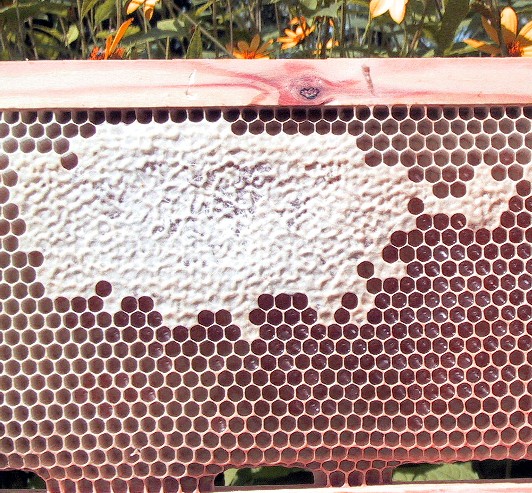 Fig. 1 A perfectly developed honeycomb with a cell diameter of 4.8 mm. The central wall was given to a colony equipped with honeycombs with 5.5 mm cells. A stroke of luck that is not always to be expected. Photo: Erik Österlund 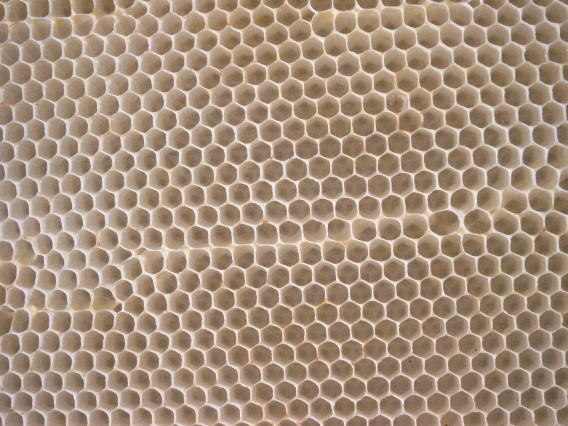 Fig. 2 A honeycomb with blind rows of cells. The neighboring cells are enlarged as a result. 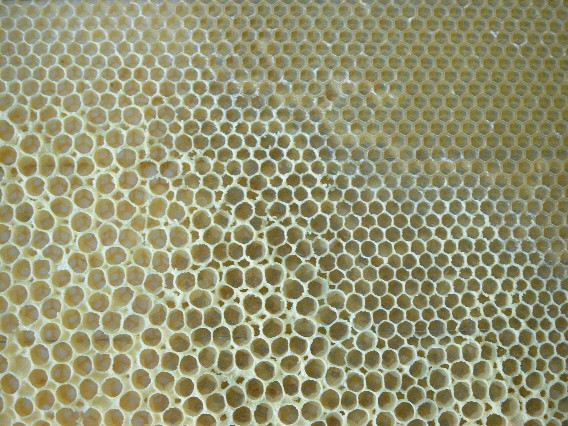 Fig. 3 A completely screwed up honeycomb. About 1/3 of the cells end up blind; the rest is enlarged into irregular drone cells. 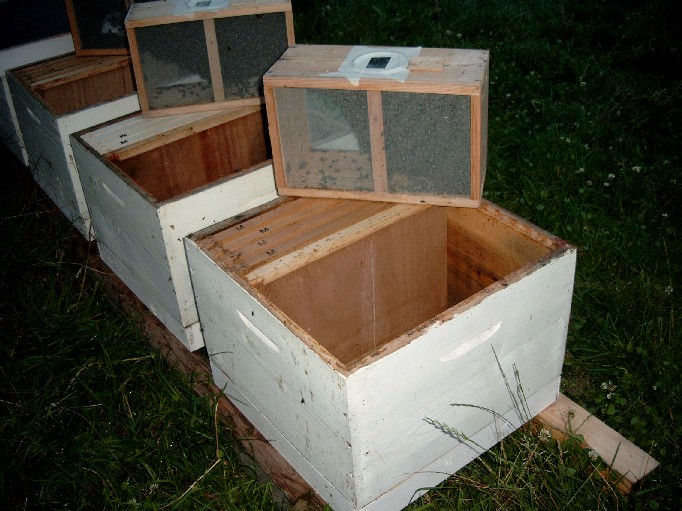 There are now some beekeepers who have succeeded in converting to 4.9 mm cells after many attempts and errors. Your previous experiences are to be summarized here (without claiming to be exhaustive).

Established lines of the breeding breeds Carnica and Buckfast were selected for many decades on artificially enlarged cells. Those colonies that got along best with the enlarged cells were preferred. It is to be expected that many of these lines (but not necessarily all!) Have lost the ability to build small cells, including at the genetic level. If such colonies are placed (forced) on expanded honeycombs with cell diameters of 4.8 or 4.9 mm, an unnatural situation arises. According to the experience of the Lusbys, such colonies are not sufficiently varroa-resistant, even if they live on a pure 4.8 mm burrow. In newer Buckfast lines that were only combined with a new origin (mostly "wild" origins) a few generations ago, or in new imports themselves, this property of developing small cells is probably to be found frequently.

The queens themselves usually do not cause any problems. 4.9 or 4.8 mm cells are pinned from all queens. They even clearly prefer smaller cells for oviposition. This also reflects the tendency that indigenous peoples build cells in the honey storage area that are 0.3-0.5 mm larger than in the breeding area.

Colonies that produce visibly smaller bees despite being reared in 5.5 mm cells may possibly be able to develop central walls with 4.9 mm cells. Such colonies are most likely to be found among new combinations with e.g. A. m. Meda, A. m. Monticola and others. The Primorski origins and Central and Northern European Mellifera origins also often have surprisingly small bees. Another possibility is offered by bees origins which, for certain reasons (heather operation, organic beekeeping) have been kept largely on natural cultivation for many generations. In this case, the natural structure should be measured.

The size of the worker bee is determined not only by its genetic makeup, but also by the size of the cell from which it hatched. These two factors - genetic and phenotypic - have different effects on bees of different origins. There are certainly origins that are relatively small despite being grown in 5.5 mm cells. The exact connections are unclear.

The size of the cells to be built in natural construction is generally determined by the body size of the building bees. But here, too, there are differences. "Genetically small" bee origins show the tendency to build smaller cells on natural structures than those from which they hatched. Erik Österlund found cell sizes of 4.95 - 5.50 mm in Apidea boxes, although the construction bees themselves hatched from 5.5 mm cells. There was a significant similarity in cell size in colonies that came from the same mother colony or whose mother colonies were proven to have siblings. Most colonies built cells 5.1-5.3 mm in diameter. In this way, such bees would automatically shrink to their natural size in the course of, for example, 5 - 10 generations of honeycombs. However, an acceleration through the administration of small-cell middle walls is desirable.

In order to find the phenotypically most suitable colonies in the stock, some possible preliminary tests are recommended here. As indicated above, some colonies produce conspicuously small bees. These are probably best suited to expanding central walls with cells 4.9 mm in diameter. The measurement of natural structures is also suitable as a pre-test, e.g. in mating boxes, if it is known from which colony the mating colonies come. It is important that the workers' building comes from the brood nest area, not from edge honeycombs, for example. Drones are also suitable for this purpose. The decisive factor is the ratio of cell sizes between the individual peoples.

There are some conditions under which the expansion of small cell center walls is more successful. The reasons and connections can only be partially explained. Only a summary of all known conditions is to be presented here.

Even colonies that are already established on 4.9 mm structures occasionally tend to ignore the small-cell central wall embossing and build larger cells when honey storage cells are to be built. This occurs above all in the upper hive area, in fully developed colonies and for full head (or with heavy feeding). For the expansion of small-cell middle walls, the corresponding hive areas and seasons should be avoided, especially in fully developed colonies.

The elegant solution: The artificial swarm with 2 steps

To make the initial phase a little easier, it is recommended to carry out the downsizing in two steps. We have had the best experience with weak artificial swarms, which are initially hammered into a few middle walls with cell diameters of 5.1 mm. Almost all bee origins can cope with this mean cell size. To avoid confusion, the honeycombs should be marked on the upper beam; in our case with “M” for “medium” (5.1 mm) and “S” for “small” (4.9 mm).

This method is particularly advisable when the available workers of the established colonies may not be suitable for downsizing. In any case, the queens should come from suitable or promising origins. The first generation of bees to hatch from the 5.1 mm cells will then be able, both genetically and phenotypically, to properly develop central walls with 4.9 mm cells. Middle walls with a cell diameter of 4.9 mm can be added approx. 5 - 6 weeks after the artificial swarm has entered; at most two at a time. These must be hung directly on the brood nest, better still between two brood combs.

The honeycombs with 5.1 mm cells are later moved to the edge of the prey. They can be left there for some time as marginal combs that are rarely incubated. However, at some point they should be removed. According to the Lusbys, a regular structure with a cell size of 4.9 (or 4.8) mm in the brood chamber is indispensable for achieving varroa resistance. 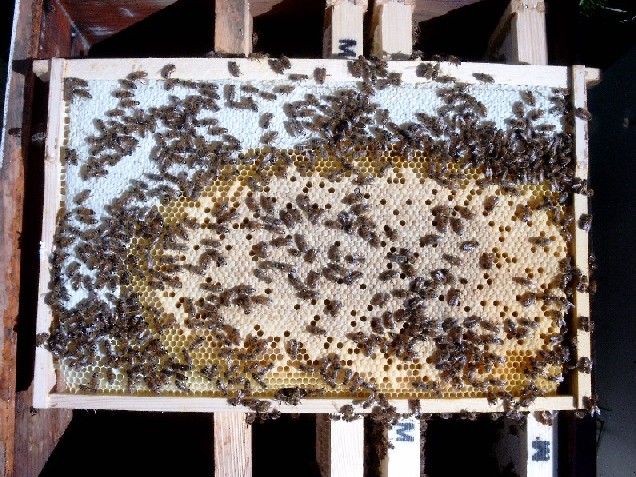 Fig. 5 Even enlarged bees can usually develop central walls with a cell diameter of 5.1 mm without any problems 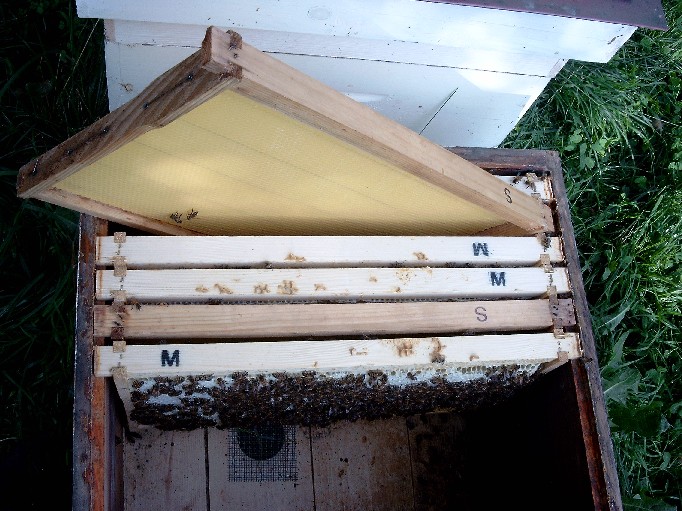 Fig. 6 Approximately 5 to 6 weeks after the artificial swarm has entered, “S” middle walls (4.9 mm cell diameter) can be added. 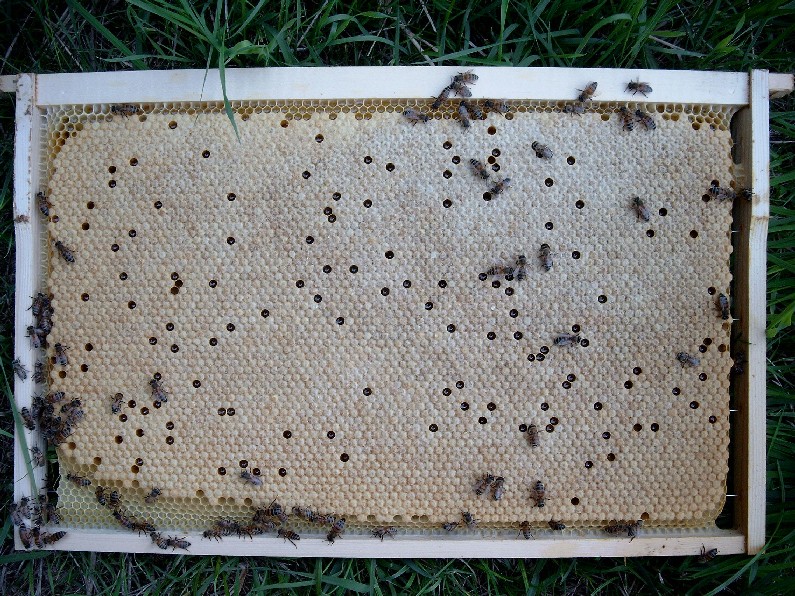 Fig. 7 The goal: perfectly developed and incubated honeycombs with 4.9 mm. This dadant honeycomb has about 10,000 brood cells.

Both the Lusbys in Arizona and Erik Österlund in Sweden use the same frame size in the hatchery and honey room. Since the honeycombs are also exchanged between the two parts of the bag, it made sense to convert all the honeycombs to the smaller cell size. This is different with e.g. Dadant hives, where half-high, never-incubated honeycombs are used in the honey chamber.

In naturally building colonies, the cells in the honey storage area are approx. 0.3-0.5 mm larger than in the breeding area. For this reason, there should be nothing against using dividing walls with cell diameters of 5.5 mm in the honey room, at least in the initial phase. So far, however, there is no experience on this. The construction behavior of the small bees hatched from 4.9 mm cells on 5.5 mm cells in the honey chamber must be observed!

In the 1960s, experiments were carried out in the USA with different cell sizes in the hatchery and honey room. Cells with a diameter of 5.1 mm were used in the brood chamber (mostly 2 Langstroth frames), and cells with a diameter of 5.7 mm in the honey chamber. This division was so successful that a barricade was superfluous. The queens always prefer the smaller cells to lay their eggs. However, since different frame sizes for brood and honey chambers are not very common in the USA, the oversized cells were often accidentally placed in the brood chamber - with unpleasant consequences. For this reason this method was abandoned.

Whether this system can also prove itself in Dadant hives with cell sizes of 4.9 mm in the brood chamber and 5.5 mm in the honey chamber has not yet been tried out.

I wish you success!